The Decline of Canada’s Economic Environment

This article analyzes the decline of Canada’s economic environment due to PM Trudeau’s decision to halt borrowing from the Bank of Canada.

The Trudeau government’s fatal decision has led to the decline of Canada’s economic environment through the following changes;

One of the major factors weakening Canada’s economic environment is the deregulation of its Financial industry.

Since 1974, the government has decreased the use of the Bank of Canada to hold the Government’s debt.

The Canadian Department of Finance outlined this trend in their 2003- 2004 Debt Management Report.

The report features the following chart which depicts the holding of government debt (bonds) by the Bank of Canada and the chartered banks from 1976 – 2003.

The graph indicates that in the general long-term trend, the amount of government debt held by the Bank of Canada has been steadily decreasing, particularly in the 80s when the Mulroney government introduced several amendments to the bank act.

These amendments served to deregulate parts of the financial system and amend existing legislation that had been in place since the mid-1930s to protect the public interest.

Since the Great Depression, financial services had been regulated through four distinct pillars; Banks, Trust companies, Securities dealers, and Insurance companies. This is also outlined in Part 3 of the long running series titled The Deregulation of Canada’s Financial Industry.

The amendments in the 80’s officially dissolved the traditional “four pillar” system Canada had relied upon for a stable economic environment.

For example, an amendment introduced in 1987 permitted Canadian Banks to invest in corporate securities dealers, and distribute government bonds. Banks were also able to conduct brokerage activities, an activity they were not permitted to do before.

This led to aggressive buyouts by the banks, acquiring securities dealers in an attempt to increase their market share.

The successive acts of deregulation enabled banks to speculate in derivatives (an aspect of  securities, instead of the securities themselves), merchant banking (trading and warehousing in entire  non-banking companies), underwriting  (guaranteeing the distribution of a new  issue of stocks), stock brokering, and  insurance.

A more in-depth analysis of bank deregulation and reserve requirements can be found in the article titled Over-leveraged position of Canadian Banks.

Since the deregulation allowed for speculation, a number of small Canadian banks experienced bankruptcies in 1990 including; Canadian Commercial Bank, Northland, Unity Bank, and Walter Stewart.

In 1990, the government stepped in to bail out these banks by negotiating settlements with both the depositors and other creditors. These settlements were referred to as Workouts.

In addition to the workouts, the government also brought in legislation to eliminate the reserve requirements altogether.

Prior to 1991, chartered banks were required to keep a certain percentage of their short term deposits as reserves with the Bank of Canada.

Since the Bank of Canada did not have to pay any interest on the statutory reserves,  the government received access to interest-free money that would not cause inflation.

However, in 1991, the Mulroney government passed an amendment to the bank act allowing for the gradual elimination of the reserve requirement altogether.

As a result of abolishing reserve requirements, the Mulroney government chose to borrow from the private banks to make up for the loss in reserves.

Thus, Mulroney began paying the chartered banks $5 – $8 billion per year on money that had previously been kept interest free at the Bank of Canada.

The costs associated with eliminating reserve requirements, along with the bailout of several Canadian banks, led the government to resorting in accounting fraud, otherwise known as “Cooking the Books,”  in order to sell the impression that it had balanced its books.

Until 2004, the Canadian government had been “cooking its books” – an accusation made by Canada’s own Auditor General, Denis Desautel in 1999.

With the exception of government Crown corporations, for years the Canadian government did not show the full asset side of their balance sheet, thus exaggerating the net debt.

The government intended to exaggerate the net debt in the current year, and minimize the net debt in future years in order to maintain the illusion of paying down the debt and improving the economic environment.

The following is an an exchange between Desautel and Committee Chairman Nelson Riis in the May 6, 1998 meeting at the Standing Committee on Finance,

Mr. Nelson Riis: There are other governments that have tried this same tactic [cooking the books]. What’s the point? There must be some political mileage in here for some people. Why would they use such a tactic?

Mr. Denis Desautels: Mr. Chairman, it’s difficult for me to ascribe particular motives to what the government has chosen to do. I’ve always been careful in interpreting my understanding of the government’s position, and I always describe it as a difference of views on how to record this type of transaction. They’ve put forward their arguments to me, but they have not convinced me with those arguments.

Mr. Nelson Riis: Would you say this is really just an honest difference of opinion, or is there something more to it than that? It seems to be such a significant shift. And we’ve heard, setting aside this particular one, where provincial governments have used similar tactics. The headlines are cooked books and misleading and all sorts of accusations. Is this simply an honest difference of opinion between folks who are commenting on the same issues?

Mr. Denis Desautels: Mr. Chairman, I think that’s a question best asked of the government. All I can say is that three years in a row the pattern has been that expenditures have been recorded at least one year ahead of the period in which, in our view, they should have been recorded.

Desautels clearly identified that the Canadian government had been inaccurately recording future expenses in the current year.

In addition to falsifying the expenses, the Government had also used cash flow accounting when it should have been using accrual accounting (capital budgeting).

Cash flow accounting records revenue when cash is received. This is misleading because rarely do businesses pay up front in today’s credit based society.

95% of the money supply runs on bank credit and promises to pay, not actual physical cash. Thus the government had pretended that its assets did not exist, when in fact they did exist.

Accrual based accounting records revenue whenever services are performed, not when cash is received. So if the government provided $1000 worth of services, it would have to record $1000 as an asset regardless if cash is paid up front or at a later date.

Back in 1999, Desautel refused to sign off unconditionally on two years’ of balance sheets until the government committed itself in using proper accounting standards.

This forced Finance Minister Paul Martin, to eventually adopt the use of proper accounting  procedures in two areas; environment  and aboriginal matters.

In 2004, the government had finally committed itself to gradually reporting all of its physical assets, such as those listed in Canada’s Public accounts, but by then the damage had already been done.

The Liberal government had been hiding the true nature of Canada’s national debt which had been exposed by the Auditor General in recent years.

Jack Biddell, an ex-government official charted the rise in Canada’s national debt and depicted this in the chart below. 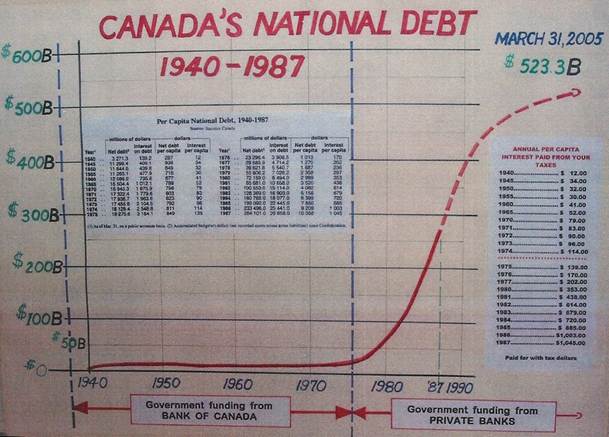 The graph depicted above can be found in Bill Abram’s documentary titled: The Canadian Banking System Exposed seen below.

Currently, in 2012, Canada’s total debt stands at over $1.1 trillion and taxpayers are forced to pay over $30 billion in interest on the debt every year.

This amounts to 11% of every tax dollar going towards the interest on the debt.

The Canadian Department of Finance outlined this in their 2011 report titled: Your Tax Dollars, which depicts the following graph.

The government spends approximately 11% of every tax dollar on public debt (interest) charges, which is equivalent to the amount of money spent on Public Safety and Defense combined.

The compound interest charges has forced the Canadian government to take on extreme measures in order to reduce the national debt.

As noted in Part 1, these extreme measures have often involved in the privatization of crown assets, fiscal austerity cuts to social programs and corporate tax cuts.

It is clear that these measures are proven ineffective since they do not address the root cause of the problem, which is the fractional reserve system underpinned by the banking system.

Many contemporary scholars and leaders have attempted to address solutions to the current problem by offering proposals for reform of the current monetary system.

We examine these proposals in greater detail in Part 8.

Part 2 – How the Monetary System Works

Part 3 – The History of the Bank of Canada

Part 4 – The Dangers of Usury in the Banking System

Part 6 – The Loss of Canadian Sovereignty

Part 8 – The Movement for Monetary Reform

Part 9 – A Review of the Fiat Money System

Part 13 – A Review of the Social Credit Money System

Part 18 – Economic Recovery at the End of the Road